Dependence on Wi-Fi is now so high that 4 out of 10 people would prioritise it over sex, chocolate, or alcohol, a new study has found.

The study, carried out by Wi-Fi connectivity provider iPass and which examined 1,700 professionals across America and Europe, found that 40.2 per cent of people now view WiFi as their number one “human luxury or necessity,” ranking above sex at 36.6 per cent and alcohol at 14.3 per cent.

END_OF_DOCUMENT_TOKEN_TO_BE_REPLACED

The refugee fled war-torn Eritrea and was offered a home in Swansea city centre, but after his flat was burgled twice, he claims he can no longer tolerate living in the Welsh city.

The religious 40-year-old immigrant, who cannot be named, was offered a flat in a high-rise block on Griffith John Street, a cul-de-sac, which features two 11-storey blocks of flats and locked up garages.

END_OF_DOCUMENT_TOKEN_TO_BE_REPLACED

As shown in a photo posted by radio host Todd Stearns, Walmart attempted to remake the cake it had originally refused to decorate. The result “looked terrible,” the police officer’s daughter said. “It doesn’t look professional.” ToddStarnes.com

Walmart is apologizing for refusing to make a police officer’s retirement cake last week after an employee told the cop’s daughter that her “thin blue line” cake design might be considered racist.

END_OF_DOCUMENT_TOKEN_TO_BE_REPLACED

The food giant Ferrero has been urged to pull one of its most famous chocolate bars off the shelves after food experts claimed it could contain “a possible carcinogen”.

A German food watchdog has claimed to have identified the presence of mineral oil aromatic hydrocarbons in Kinder products, which are made by the Italian firm.

END_OF_DOCUMENT_TOKEN_TO_BE_REPLACED 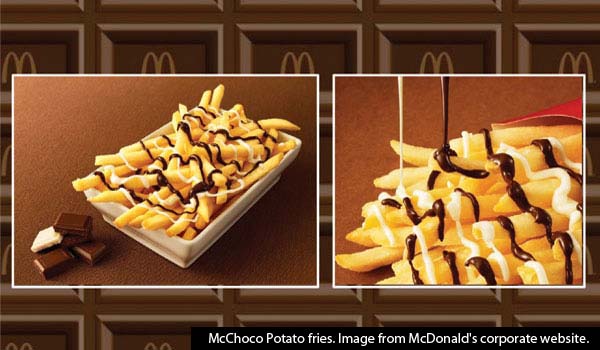 McDonalds is testing a spin on it’s classic French fries, drizzling them with chocolate and calling them McChoco Potato. You can have your fries with two types of chocolate sauces: chocolate with cacao flavor and white milk chocolate.

McDonald’s hopes this combination will give customers a salty and sweet harmonious taste, so the customer can eat them as a side to a burger, or as a dessert.